Posted in Events, Home Page Featured PostTagged Walk a Mile in Her Shoes

It’s time to wear red, gather your friends and family, and walk in solidarity with survivors of violence.

The 12th annual Walk a Mile in Her Shoes – a signature YWCA Hamilton event that raises funds and awareness to help end violence against women – will take place from August 11 to 18, 2021. Due to Covid-19 protocols, in place of our traditional in-person rally, we are once again holding a virtual Walk Week including an online rally and awards ceremony.

This year, more than ever, it’s crucial to support the ongoing fight to end violence against women. We know that domestic violence rates have skyrocketed due to the Covid-19 pandemic, when repeated lockdowns saw women trapped at home with their abusers. Last year, 160 women and girls were murdered in Canada, an increase from the 118 lives lost the year before – the equivalent of one woman or girl being murdered every 2.3 days.

Funds raised during Walk a Mile in Her Shoes, presented this year by LiUNA, provide vital support to our programs, which provide housing, counselling, and other supports to women and families experiencing homelessness or fleeing domestic violence. Last year, we raised over $113,000, and this year, our goal is $150,000 due to our increase in essential services supporting survivors.

Today, we’d like to introduce you to the co-emcees of our award ceremonies: Rafal Tomczuk and Lohifa Pogoson-Acker. Both Rafal and Lohifa are deeply involved in our community and longtime friends of YWCA Hamilton. We asked both Rafal and Lohifa to share why they chose to lend their support to Walk a Mile in Her Shoes, and what it means to join the fight to end violence against women. 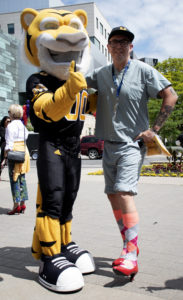 For Rafal, Walk a Mile in Her Shoes is a deeply personal event.

Rafal – or Raf, as he’s known around YWCA Hamilton – experienced domestic abuse in his household as a child.

For Raf, now a registered nurse at St. Joseph’s Healthcare in Hamilton, one of the most difficult parts of growing up in an abusive household was dealing with the uncertainty the day may bring, and “worrying about things that children should not worry about.”

“As a child, you should worry about growing up in a healthy household with opportunities for self-development – not wondering if you will be able to do your homework, or whether [you’ll] have to sleep somewhere else for the night because your parent is intoxicated or violent. It’s not a healthy environment to grow up in,” he said.

One of the other challenges that faced Raf as a child were feelings of shame and embarrassment.

“It’s embarrassing that it’s happening to you, and that it happens with the very person who is supposed to love you and supposed to protect you. It’s devastating. Nobody talks about it, but that’s a big part of it,” he said.

Through his longtime connection to YWCA Hamilton and Walk a Mile in Her Shoes, Raf now works to contribute to programs that support women and children who are overcoming the same experiences he faced as a child.

“It hit close to home as I wanted to make sure that women in our community have a safe place to live, to rebuild their lives, to be away from violence,” he said. “I love the work that YWCA does and all the programs that they have, and the strong values that they live by.” 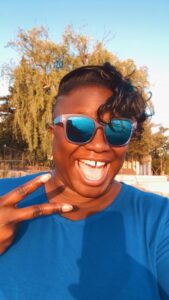 Lohifa, a hairstylist, business owner, and 2021 Women of Distinction Nominee, is bringing her trademark infectious energy to her role as emcee for our Walk a Mile in Her Shoes virtual awards ceremony.

“I love the Y, I love Hamilton, I love supporting women, I love to see women empowered, I love to see the community moving in the direction of positive change,” she said.

But Lohifa also connects to the mission of Walk a Mile in Her Shoes.

Lohifa, who has been recognized for her work as a hairstylist on the debut season of “Canada’s Drag Race,” is also calling on her deep roots in the community and wide network of friends in Hamilton and beyond to join her in participating in Walk Week.

“I would encourage anyone who is reading this post or who sees the ads to get involved in one way or another – start a team, join a team, share on social media – whatever we can do to reach far and wide to get the message out,” she said.

“It’s important to me to have these problems solved, and initiate the kinds of changes we want to see.”

Thank you for your hard work and continued support, Raf and Lohifa, and see you at the awards ceremony!

YWCA Hamilton’s Take: The Tokyo Olympics brought the gender divide in sports to the forefront