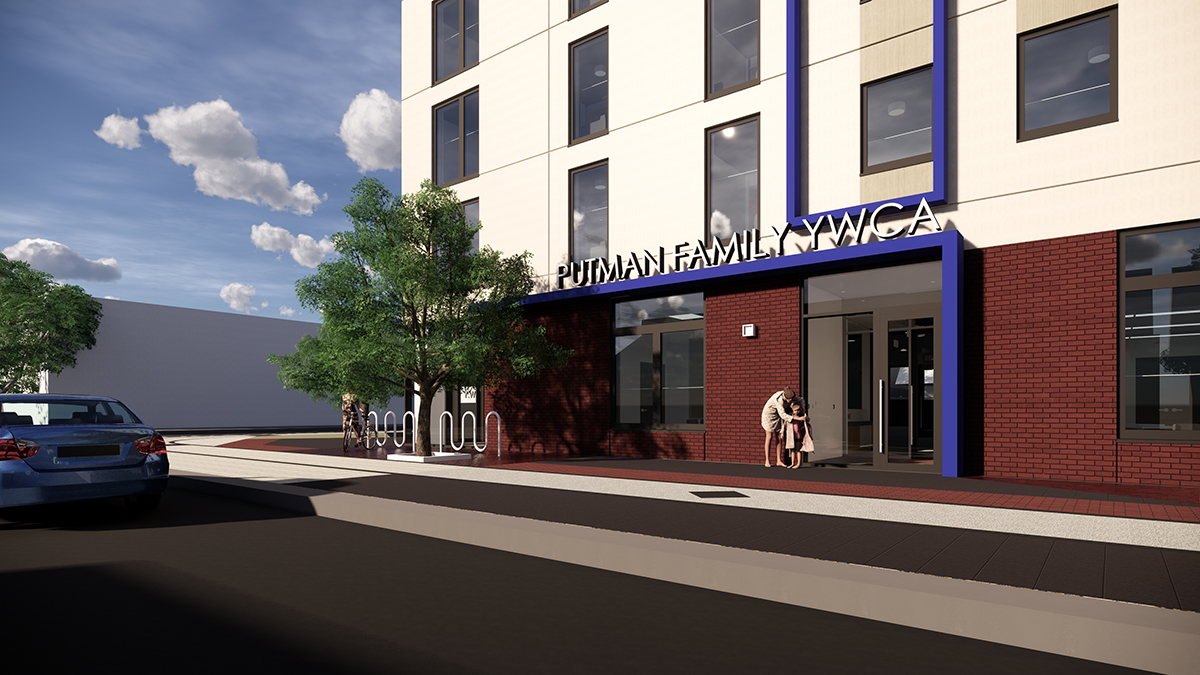 YWCA Hamilton’s brand-new building is taking shape on Ottawa Street – and members of the community say they’re eager to welcome the new, state-of-the-art facility to the neighbourhood.

After a short delay due to the Covid-19 pandemic, crews are once again working on the new Putman Family YWCA and are on track to finish the building in the spring of 2021.

The six-storey, fully-accessible building will offer affordable housing to women and children, a first for the Hamilton area. The $24 million building – designed as a highly energy-efficient “passive house” – will include 50 units, 15 of which will be dedicated to women with developmental disabilities. It will also include two community spaces, one indoor and one outdoor, as well as a Senior’s and Innovation Centre.

For Peter Rumble, the building has a special significance.

Peter met his wife – the late Jill Rumble, CEO of YWCA Hamilton from 1992 to 2003 – at the Ottawa Street YWCA back in the 1970s. At that time, he was a student in recreation leadership at Mohawk College. He met Jill, an Australian YWCA employee, when he did his first placement on Ottawa Street.

“Lo and behold we met – and she decided to stay in Canada, and we got married,” he said. “Our family has a whole connection. You could say we were a YWCA family.”

A resident of the Crown Point neighbourhood for 35 years, Peter says it’s been fascinating to watch the Putman Family YWCA building take shape since construction began in late 2018.

“I drive by it at least two to three times to day, and it is exciting to see the size of it,” he said. “It’s certainly an anchor on Ottawa Street.”

For James Cairns, who likes to bring his toddler to check out the construction vehicles at the building site, the major benefit of the building is having affordable housing in the neighbourhood.

“We’re very supportive and pleased. If there’s anything that the city needs in general – and this neighbourhood specifically – it’s affordable housing,” he said. “If this can provide that, not only here but as a model for other developments, that’s really great and we’re happy to have it in the neighbourhood.”

Crown Point resident Shannon DeFreitas says she’s also pleased to see more affordable housing – and to have a venue for classes she can take with her young daughter, Liv.

“I’m definitely looking forward to some affordable housing. I think it’s needed in the city, especially in this area,” she said. “It’ll be nice to have an area with community access – the chance for classes will be cool as well.”

As Shannon and James point out, The Putman Family YWCA will help ensure that more women and children can find safe, reliable, affordable housing. In Hamilton, the average one-bedroom apartment costs $1,555 per month – a 30 per cent year over year increase, according to the National Rental report. On any given night in Hamilton, over 300 women experience homelessness.

“We’re surrounded by the GTA, by Niagara, and by expensive real estate, so it’s only a matter of time before ours becomes unaffordable,” he said.

Scott also added that the project hits the right balance between adding density to the neighbourhood while still staying true to Ottawa Street’s architectural character.

“It fits into the fabric of the neighbourhood. It’s medium rise, so it’s not going to dominate the streetscape,” he said.

Steve Sauvé, who has lived in the Ottawa Street neighbourhood for 17 years, says he’s watched Ottawa Street’s unique character change and evolve – and he feels the Putman Family YWCA will help maintain the street’s unique dynamic.

“The demographic here has expanded, but it’s not overly gentrified,” he said.  “This building helps to maintain that by giving everyone a chance to participate and be a part of this community – not just people with a little bit of money who can afford it.”

If you’d like to stay up-to-date about the Putman Family YWCA, sign up below to receive email updates about the project.