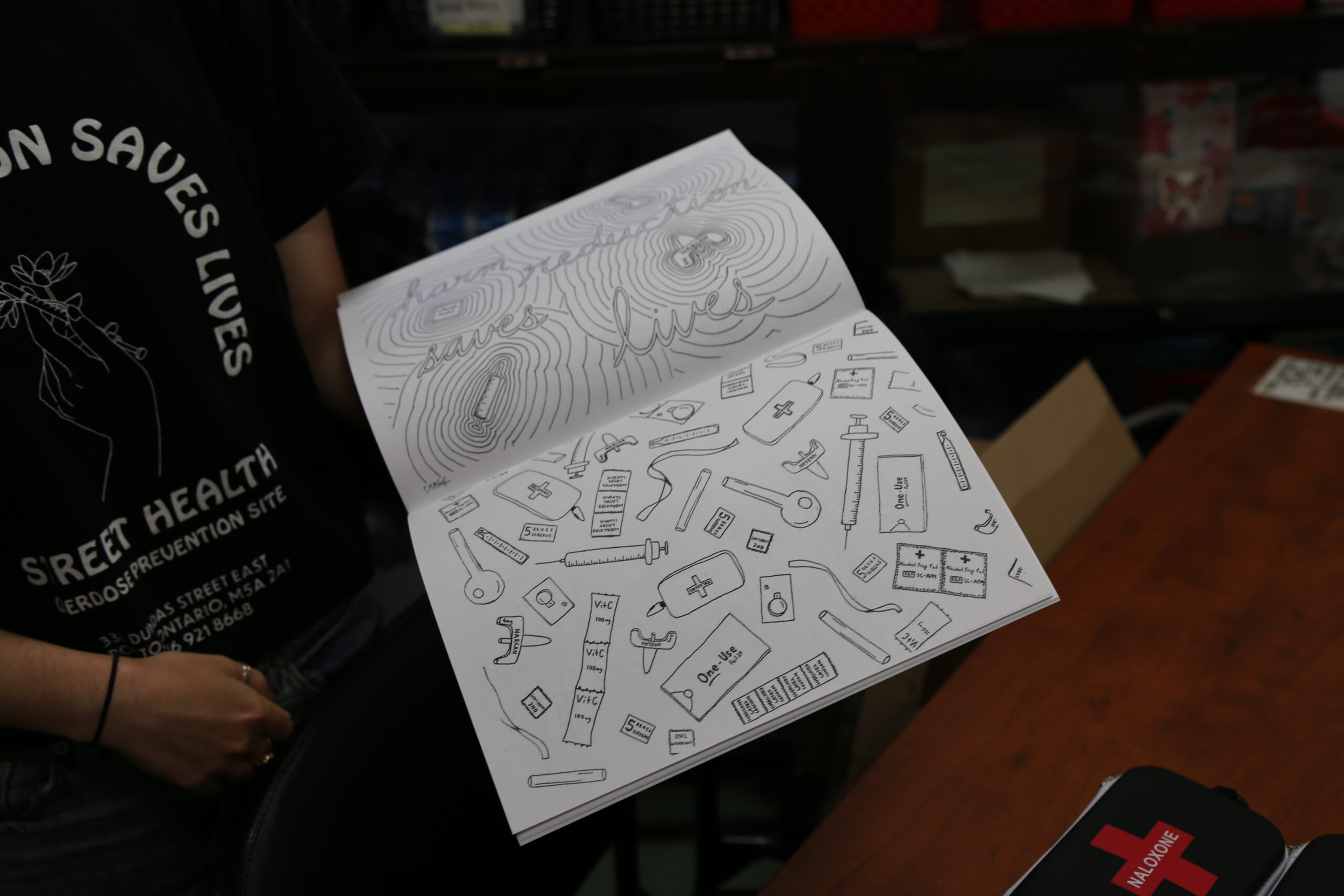 There are stories of loss and tragedy, particularly as staff, clients, and community members marked International Overdose Awareness Day on August 31. Those stories are embodied by the two purple chairs in the corner bearing the names of those who have been lost to drug poisoning – Kim, Steph, Alex, Kat, Summer, Amanda.

But there are also stories of hope, of community, and of promise for the future. These stories are visible through the colourful pages of art taped up on the walls, all created by the women and gender-diverse people who use the space – and through the resilience and strength that YWCA Hamilton Staff witness in clients every day.

It’s exactly those stories of connection and healing that inspired Emunah Woolf, who worked on staff at the Safer Use Space, to create a colouring book inspired by the women and gender-diverse people they met there.

The colouring book contains pages directly inspired by the conversations Emunah had with clients. Some are even direct quotes – including “Camping is fun, Encampments are not.”

“We supervise injections, but then we have different things in the room like books, magazines, and colouring books for folks to use while they’re being monitored,” they said. “One of the things that I found is that colouring with clients helped to facilitate really difficult conversations – I think because you’re not really having to make eye contact, and you’re connecting over something.”

However, Emunah said that most colouring books on the market felt to flowery and positive for use in the Safer Use Space, and weren’t resonating with clients.

“It just wasn’t matching the vibe of the space,” they said. “They really wanted to colour the things that were in their life.”

As a result, Emunah started creating drawings of things that did resonate – needles, naloxone kits, encampments, and the Safer Use Space itself. After awhile, clients in the space started specifically asking for Emunah’s drawings to colour.

“Creating art together helped them feel really seen, and helped them feel like what they were saying was valuable,” they said. “We put the drawings up on the walls, and it made people feel like this was their home, and they had a space that was safe and their own.

“I’m a huge fan of using art as a way to connect with folks and make them feel valued.”

That impact of the Safer Use Space has been massive, says Amy Deschamps, Director of Housing & Gender Based Violence Support Services at YWCA Hamilton. Since it opened in late April, there have been 109 unique visitors to the Safer Use Space and over 1,070 supervised injections. Only 14 of those injections resulted in drug poisonings or overdoses that needed to be reversed. There have been no calls to emergency services or paramedics.

“Last summer, we were responding to roughly three overdoses a day between our programs, and outside of our space. Each time, that was a call to emergency services to come and assess,” Amy said.

“Since this space opened, we have seen no responses that require us to call an ambulance. If I think about the thousand times we’ve helped someone use safely — that could have been that many times that it could have ended differently.

“This means there’s much less burden on emergency services and healthcare to have to come and support our staff.”

Not only does the Safer Use Space help create physical safety, Amy said, but it also helped women and gender-diverse people have a sense of emotional and mental security.

“You hear the narratives of the women and gender-diverse folks using the space about how much it means to them – not only because they can use safely, but the fact that they can talk about their substance use without shame.”

Learn more about Safer Use Space