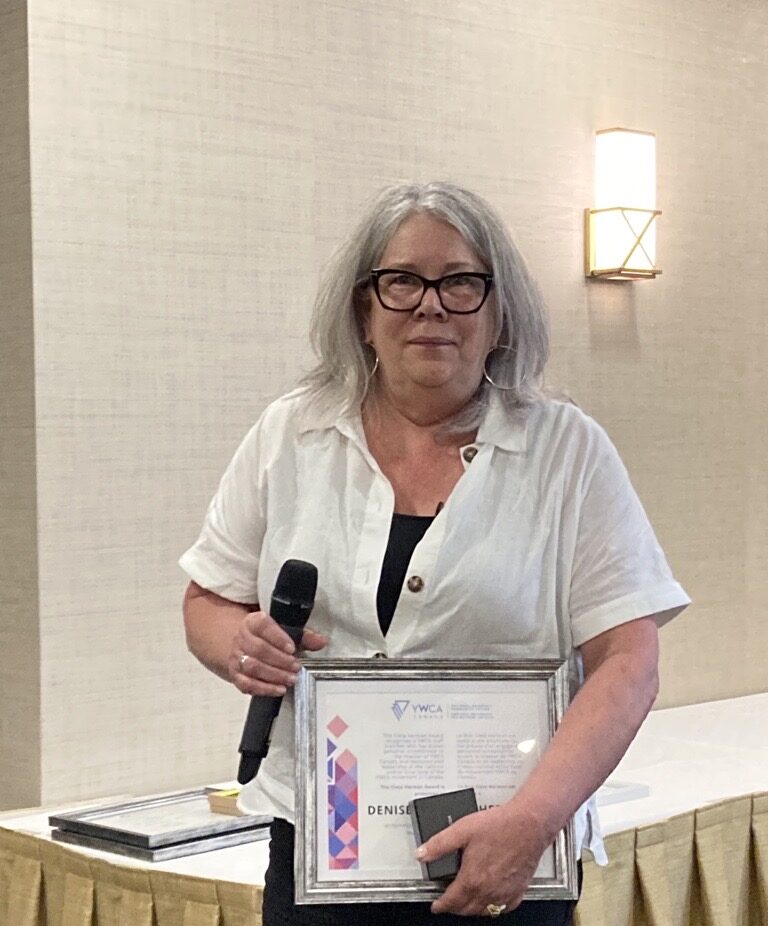 YWCA Hamilton is thrilled to congratulate our CEO, Denise Christopherson, for receiving the 2022 Cleta Herman Award!

This award is presented each year at YWCA Canada’s Annual Members’ Meeting, a gathering of representatives from YWCA Member Associations across the country. This year’s Annual Members Meeting took place in early June in Toronto, and was capped off with an awards ceremony that specifically recognized the contributions of individuals, volunteers and staff who go above and beyond for the advancement of the YWCA movement.

“Denise is a bold, passionate and inspiring leader. She is known for telling it like it is – a characteristic of hers which has become well known and loved within our Hamilton community,” said Sarah Ernest, Director of Philanthropy and Communications and one of Denise’s nominators.

“Denise is a respected CEO, a bridge-builder and an ally who tirelessly advocates for advancing gender equality locally, nationally and internationally. She uses her privilege and her voice to advocate for others, and works hard to ensure that more women and gender-diverse people have a seat at decision making tables.”

Denise was appointed as CEO of YWCA Hamilton in 2010. Under her leadership, YWCA Hamilton has successfully navigated the COVID-19 pandemic, expanded programming, diversified revenue streams, nurtured new partnerships, become a living wage employer, and undertaken an organizational review to amplify the voices of Indigenous, Black and racialized employees and address areas of inequity in our policies and processes.

Denise also led the organization through the planning, construction, and opening of the new Putman Family YWCA, a first-of-its kind, 50-unit affordable housing facility for women and women-led families. Denise’s passion in leading all of this work has greatly strengthened YWCA Hamilton as a force for positive change in our community.

This award is presented in honour of Cleta Herman, Executive Director of YWCA Vancouver from 1958 until 1984. It recognizes an exceptional individual in the YWCA movement in Canada who has demonstrated individual service as a YWCA staff member, mentorship and role modelling, innovation in working towards gender equity for all women through informed advocacy, support of colleagues, and leadership at the local and or national level.

At YWCA Hamilton, we are so proud to be led by a CEO whose passion, dedication, and empathy makes our community better every day.

Congratulations, Denise, and thank you for all that you do!

Introducing the recipient of the 2022 Olga Cloke Bursary – Jessica Vinluan!