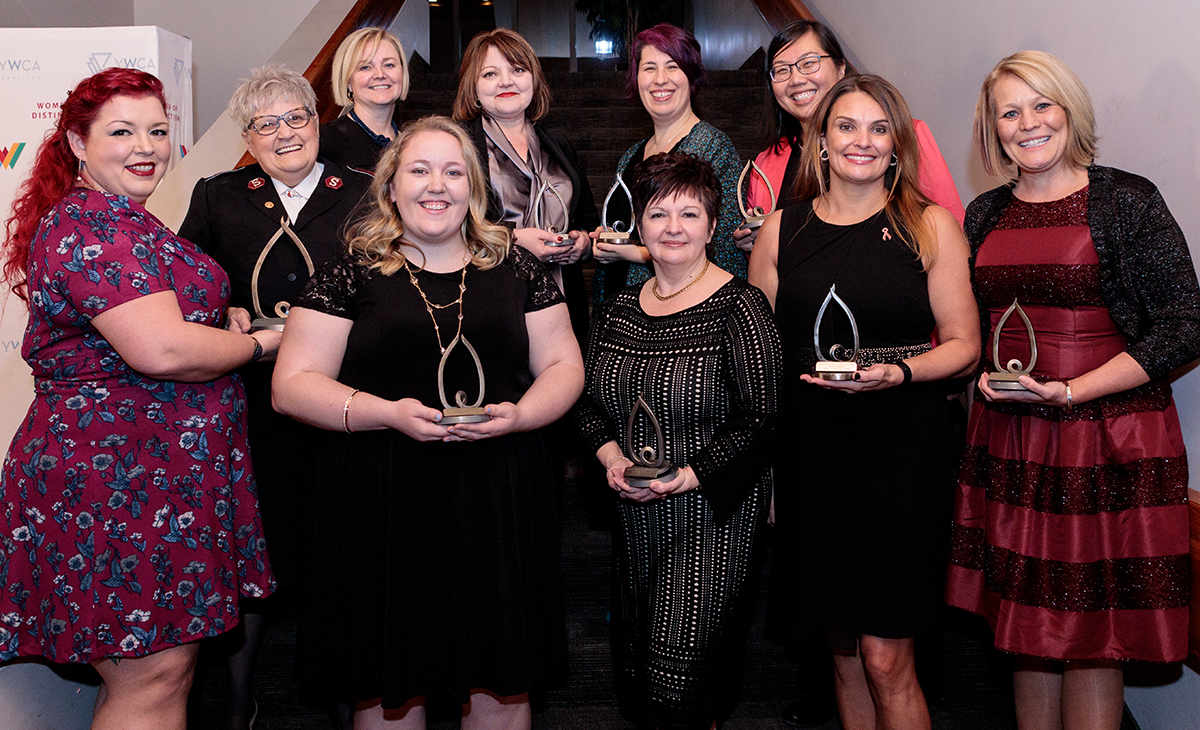 Posted in Events, Women of Distinction

Our selfie game was strong and social media was buzzing Thursday evening, as more than 900 people descended upon the Hamilton Convention Centre by Carmen’s to celebrate some of the best and brightest women in Hamilton. The 43rd annual Women of Distinction Awards gala, which recognizes the achievements of women leaders in Hamilton, celebrated more than 73 women and business who are making tangible impact on the Hamilton community. And in the process, raised more than $178,000 for YWCA Hamilton programs and services that will help improve and enrich the lives of women, girls and families in this city.

Photos of red carpet poses, clinking glasses and greeting friends old and new poured into social media, pushing #WODHamilton to the top of the list of trending hashtags in Canada, reaching an estimated 142,206 twitter accounts and 196,769 impressions. In numbers of people and funds raised, it was the largest Hamilton Women of Distinction Awards in history. And the event’s signature drink, Rose the Riveter, was an undisputed hit.

This year, YWCA Hamilton also honoured a woman in our community for her strength, resilience and commitment to the empowerment of survivors of domestic violence. She is an ambassador for change, and a force to be reckoned with. Candace Gagne, an alumnus of our Women in Entrepreneurship program, founder of Challenger X obstacle training, and survivor of domestic violence, received a standing ovation when she accepted our first-ever Honourary Women of Distinction Award.

The competition was fierce in all categories, but at the end of the night, eight individuals and one business walked away with hardware.

Maddie Brockbank is a fourth-year Honours Bachelor of Social Work student at McMaster University. Maddie has demonstrated a commitment to sexual violence prevention through continued research, activism, and advocacy, with a specific focus on conceptualizing and making tangible male allyship.

Maddie dreams of being a “TED-talker,” professor, researcher, and public educator, and has already begun to take up this work through numerous pursuits.

Maddie took initiative in applying for the Clarke Prize in Advocacy and Active Citizenship and was awarded first place and $3000 for her pitch to improve community sexual violence prevention efforts with men. With funds obtained through the Clarke Prize, Maddie worked tirelessly and independently organized a community event engaging male-identified folks on campus in allyship and violence prevention through coordinating an interactive presentation with the support of numerous social service agencies in Hamilton and beyond. In this pursuit, Maddie raised $2700 for the Sexual Assault Centre of Hamilton and garnered significant community support on and off campus.

Lisa Pijuan-Nomura is a Hamilton-based artist, storyteller, creativity coach and community builder. For 30 years her artistic practice has been focused on telling stories, whether it be creating and performing one-woman shows or through multimedia collage pieces. She is a huge proponent of women-driven arts initiatives. And through her honest telling of her experiences with breast cancer, she has encouraged others to speak openly about their struggles and to turn their battles into art. Lisa has been a lifelong advocate for women’s voices within the arts community. She has been an integral voice on numerous boards, advisory committees and grassroots groups working to represent diverse voices within the theatre, dance and visual arts communities. She has performed across Canada, in Mexico and Europe. She is the recipient of grants and awards including the 2014 Hamilton Arts Award for Performance.

After moving to Hamilton in 2012, Lisa has initiated arts events including Handmade Hamilton (2012), a yearly community craft show exhibiting some of Hamilton’s finest artisans, The Hamilton 7, a collective of professional storytellers, Stories from Hamilton, where she teaches storytelling workshops to local residents, and most recently, Mighty Brave, a youth arts collective.

Tammy Hwang has the perfect mix of ambition and humility, of optimism and realism, and of leadership and diligence. She is an active participant and leader within the community, group facilitator, and chief enabler to all types of local companies.

She currently works for the City of Hamilton during the day as a Business Development Officer – Global Hamilton, attracting and retaining talented immigrants and international firms to Hamilton. She also focuses on creating jobs and wealth for immigrants, newcomers and existing diverse populations here in the City of Hamilton.

Tammy also co-founded and manages a co-working space called CoMotion on King. And before that she co-founded Strive Consulting, to help the city’s non-profits with organizational issues.

Tammy was also part of the team that built Hamilton’s Innovation Factory into a supportive giant in the city’s entrepreneurial system and was involved in the infancy of Hamilton Hive, the city’s umbrella network for young professional groups.

Clare was born and raised in Hamilton and has been an active community and provincial leader and volunteer in the area of community engagement, social justice and health for more than 35 years. She holds a master’s degree in social work and has extensive clinical, research and leadership experience in the area of violence against women, trauma and grief. Since 2015 she has been the executive director for the Dr. Bob Kemp Hospice and is spearheading a community engagement strategy to open the conversation of death and dying, advance care planning, hospice palliative care, grief and bereavement. For 15 years Clare worked in the Violence against Women Sector, as ED for Interval House of Hamilton.

Clare was instrumental in creating the CFL policy for domestic violence and played an instrumental role in getting the orthopaedic royal college training exams to add a question on intimate partner violence for all surgeons taking the national ortho exams.

Through public awareness and education Clare advocates to ensure there is no barrier to palliative care and bereavement support for kids and adults. She is getting the community to talk about ‘the end journey’ and to realize that grief is a journey not an event.

Dr. Anna L. Moro is an Associate Professor in the Department of Linguistics and Languages at McMaster University. After 9 years of advocating for the value of a linguistics-based transition program for ESL students who would otherwise be rejected by the university, Anna launched the McMaster English Language Development Program (MELD), which she now oversees as Director. Dr. Moro is also the director for the McMaster English Readiness for Graduate Excellence (MERGE) program. Both programs work to improve oral and written communication skills, and succeed in an English-speaking university environment.

Anna also developed a certificate program in Leadership and Cross-Cultural Literacy. She also co-developed McMaster’s Integrated Business and Humanities degree. She has also spoken extensively on the topic of developing essential skills such as communication, empathy, critical thinking and leadership.

Dr. Moro has received recognition for her teaching, including the MSU Teaching Award (2003), the President’s Award for Excellence in Teaching (2005), and the OCUFA (Ontario Confederation of University Faculty Associations) Teaching Award, 2006.

Jamie McMillan is a journeyman ironworker/boilermaker and founder of KickAss Careers. She became an ironworker in 2002 when women only represented 2% of the workforce across Canada and the United States. She thoroughly understands the stereotypes and struggles that women face in male-dominated occupations, and she is determined to equal the playing field for women in trades.

Her mission: Engage, educate and encourage youth to consider careers in skilled trades and technology through school and community outreach.

She speaks to more than 20,000 grade 5-12 students every year, and has gained international notoriety. She has opened doors and minds to the career possibilities in the skilled trades, and shows youth an alternate pathway to rewarding and well-paid careers in the trades. Jamie takes six months off each year from her trades job to promote careers in underrepresented occupations and to encourage youth to consider the vast opportunities the trades have to offer. Jamie also volunteers her time on the YWCA Equitable Pathways to Technical Fields and Skilled Trades Advisory Committee.

Growing up Jamie wanted to be a miner like her father but was discouraged by its absence of women. So she followed in her mother’s footsteps and became a health care professional. Jamie spent years working in health care facilities, homecare, and restaurants. Discovering the trades changed her career path and gave her a feeling of self-worth and empowerment, and since then she has become extremely passionate about encouraging others to seek out similar pathways.

Louisa Drost is the Director Student Wellness Initiatives at Mohawk College, where she has worked at creating a healthier place for both students and employees by vastly expanding access to, and improving the quality of, mental health and wellness services. This includes Mental Health in Motion, a peer-led mental health group that reaches more than 4,700 students per year.

Louisa has served on community boards and is the co-founder of Strides2Wellness, an organization dedicated to helping people find wellness through movement. Last year, Strides2Wellness raised funds for a naturalized playground and healing garden for Pathstone Mental Health, a children’s mental health group in Niagara.

Under Louisa’s leadership, the conversation at Mohawk College has shifted from mental illness to mental wellness. Louisa has spearheaded programs and initiatives that are making a difference in other areas as well, including more awareness and education around sexualized violence. She was recently appointed to a committee tasked with developing national standards for wellness and mental health for postsecondary students.

Louisa has also previously served a 3-year term on Board of Directors at the Grand River Community Health Centre (2014-2017).

ArcelorMittal Dofasco, over its 106-year history, has always been an employer that has displayed leadership and innovation through an engaging workplace. ArcelorMittal Dofasco is committed to the work/life balance of its employees and supports them with many initiatives including health and wellness programs, on-site fitness facilities, recreational facilities, leisure programs, counselling and assistance services and more.

Four of ArcelorMittal Dofasco’s top ten senior management positions are held by women and an employee-led Diversity and Inclusion Group develops strategies to increase the number of women in advanced manufacturing and non-traditional careers.

Its famous tag line “Our Product is Steel. Our Strength Is People.” is more than a slogan! It is how it operates as an organization. Employee engagement is in every aspect of its business and is vitally important. Employees, because they are engaged, are fully involved and enthusiastic about their work. They are inspired and inspiring others. Passionate and committed every day to investing the discretionary effort that is needed for both the individual to succeed as well as the organization.

Colonel Marguerite Ward has significant overseas experience and has served in Pakistan, South Africa, and Zimbabwe. She has worked largely for women’s issues and HIV/AIDS, and has faced the challenges of violence, discrimination, critical shortages and 10,000 percent inflation.

Marguerite long recognized the wisdom of “it takes a village”. Her career is about the exponential power of partnerships and felt that it was in community that the answers to the challenges of her work in socials services would be found.

Her final role with The Salvation Army before retiring in June 2018 (after a 50-year career with the organization) was Executive Director of Ellen Osler Home, a Dundas-based facility that helped women leaving prison transition into the community. Marguerite actively engaged the community through service organizations and building partnerships with other non-profits. Her team-building approach meant her part-time position often required more than full-time hours, which she gave. She mentored and trained the people around her and, with great humility, leaned in to ensure her staff and the residents of Osler House could absolutely count on her support.

Marguerite continues to serve community in retirement, assuming the role of President of the Rotary Club of Dundas in January 2019.

Want to invest in the Power of Women? It’s not too late to make a donation that will improve the lives of women, girls and families in Hamilton.